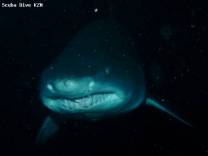 Aliwal Shoal is a small submerged reef which has become famous for the thousands of ragged tooth sharks that live here in winter.

Aliwal Shoal is reached after a bumpy twenty minute boat ride from the Umkomaas Bridge at the Mkomanzi river entrance. She was named after a 19th century three masted vessel named Aliwal that almost collided with this submerged sandstone reef in 1849. Captain James Anderson informed other seafarers and ever since his ship was rewarded with the honour of naming a world famous reef.

Geologically the shoal was formed 80.000 years ago when heavy rainfall washed away much of the sand until a solid sandstone rock formation was left. Later the oceans rose and flooded the dunes which are now named Aliwal Shoal. It is an area with many swimmthroughs, holes, hiding places, gullies and caverns.

Umkomaas is a small coastal town only fifty km south of Durban which enjoys the warm subtropical Kwazulu-Natal coast. Its Zulu name is Umkomanzi and means 'watering place of whales' given by King Shaka Zulu himself in 1928.

A perfect time to visit Aliwal Shoal is between June and November when the shoal is a breeding place for thousands of Ragged Tooth Sharks or affectionately called 'Raggies'. They look terrifying but when not provoked they won't harm you. There are very few accidents reported with these creatures and Aliwal Shoal is not a cage diving destination. It is confined open water diving with several types of sharks but also with tropical marine life. The three hundred meter wide and three km long reef is only five kilometers offshore and benefits from two ocean currents. The cold Benguela and the warm Agulhas current bang into each other creating a rich and diverse underwater habitat which attracts many different species. Water temperatures can drop below twenty in winter but thick wetsuits are still enough not to get cold after a forty minute long dive. Visibility ranges from five to forty meters and is often best in the winter.

Some of the better dive sites around this beautiful coral shelve are Raggie's Cave, Shark Alley and the two wrecks Nebo and the Produce. Ragged Tooth Sharks are common in late winter and Tiger Sharks, Hammerheads and Zambezi Sharks are often spotted in summer. The water is warm enough for excellent coverage of anemones, sponges and other healthy tropical coloured coral. Other species around the shoal are Brindle Bass, King Mackerel, Dorado, Manta Rays and even Humpback Whales. Weekends can be very crowded, especially during Ragged Tooth Shark season when tens of dive groups line up to see this spectacular world famous event.

With 20 years diving the South African Coast, we have the wealth and knowledge to find and show you the best that our oceans have to offer. We offer dive and land Safaries that you will never forget and never want to go back home from!

We cater for divers from around the world and provide safaries from self drive to guided tours, for individuals, groups and everthing in between. We include diving, with sharks to walking in the bush with the Big 5. Contact us and find out more. Technical and Rebreather catered for
- Scuba dive KZN, 11 Maclean Street, Umkomaas