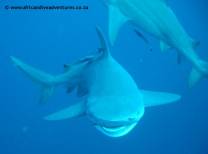 KwaZulu-Natal is South Africa's eastern most province bordering Mozambique, Swaziland, Lesotho and the Indian Ocean. It is often referred to as the garden province and experiences quite some rain and crystal clear year around warm weather. It was formed in 1994 when two smaller provinces named Zululand (KwaZulu in Zulu) and Natalia joined forces and became one. Inland you will have iSimangaliso or greater St Lucia Wetland Park with many fishing grounds, excellent mountain walks and several smaller game reserves where hippos, crocodiles and even leopards are regular sightings. There is a two hundred km long mountain range named Drakensberg which is phenomenal with its steep peaks and even awarded the name of a world heritage site. Further more you can visit its rich history and colonial past in the thriving city Durban and at many battlefields and museums between the Boers, Zulu's and English.

Diving South Africa is one of the most popular tourist attractions along this coast as well. Mainly Aliwal Shoal, Protea Banks and the offshore reefs near Sodwana Bay are blessed with excellent coral and marine life, mainly because of its warm waters of the southern Agulhas current. It is especially famous for regular encounters of all 'the big stuff'. Whether it are guitar sharks, tiger sharks, bullsharks or hammer heads you will find them here. There are breeding area's for turtles and a world famous event named the Sardine Run each year where you have the chance of diving among millions of migrating sardines being hunted by sharks. Protea Banks is very famous for its encounters with large pelagic species and several types of sharks. Aliwal Shoal is home to hundreds of ragged-tooth sharks seen mostly between June and October. With all its pinnacle and excellent color life it is also a favourite for some excellent coral formations. Sodwana Bay is without doubt the best known area for diving with several large reefs close to shore and within easy reach for divers. Here, large species are less common but definitely not absent. It is the wide variety and huge numbers of aquatic life that sets the tone here. Kwazulu Natal is a region that suits all divers and offers common and unique dive experiences in the world.

Dive the Big Five for Scuba Diving and Wildlife Safaris